LISTEN TO THE COIQ PODCAST:

LISTEN TO THE COIQ PODCAST: Telemedicine is here to stay. What to expect the day after w/ Joe Kvedar

Gladwellian Healthcare: How to Pursue Your Brand’s Tipping Point

You’ve probably heard of Malcolm Gladwell’s massively popular book The Tipping Point: How Little Things Can Make a Big Difference released in 2000. In his book, Gladwell dissects the Tipping Point theory, a term which originally described medical phenomena like viruses and how they can reach a “critical point”of dissemination. Through his dissection, he finds that the Tipping Point operates on a few key principles that can be easily applied to social phenomena as well.

In his book, Gladwell makes some revolutionary observations about the way ideas spread and how it affects the world around us. He gives us tangible, real-life examples of how the Tipping Point can be seen in action. But more importantly, this insight shows us how we can leverage certain ideas of the theory to apply to our personal and professional pursuits. By understanding the Tipping Point, healthcare providers and marketers can gain a leg-up in the infinite quest to find success in today’s competitive business environment. 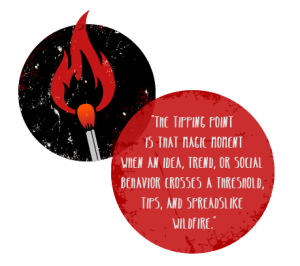 What Is the Tipping Point?

In the words of Gladwell, “The tipping point is that magic moment when an idea, trend, or social behavior crosses a threshold, tips, and spreads like wildfire.” Think of it this way: it only takes one sick person to start a flu epidemic. So too, a small, yet precisely-targeted push, can start a social epidemic – the popularity of an innovative product, a new fashion trend, or a crime rate drop. When applied to marketing, communicating, and disseminating ideas, the Tipping Point theory can provide us with important insight into how to position our brands, products, and services to spread like wildfire. 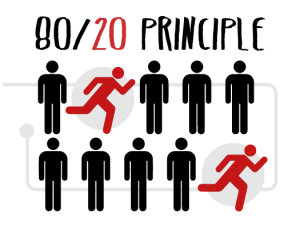 According to Gladwell, there are three main rules that govern the Tipping Point:

Based on the well-known “Pareto Principle,” or “80/20 Principle,” the Law of the Few states that the most significant attention will come from only a few key players. As the Pareto Principle states it, 80 percent of the action will be driven by 20 percent of participants. The Law of the Few also discusses that these key players have specific roles. “Mavens” are the information specialists, “connectors” are those who bring the idea to larger networks of consumers, and “salesmen” are those who, well… sell it! You can also think of these key players as the early adopters of the innovation or idea.

This essentially asks how memorable an idea, product, or service is and how easily it can catch on among consumers and participants. In his book, Gladwell uses popular children’s shows like Blue’s Clues and Sesame Street to show how they pioneered a new, sticky way for children to learn, which enhanced retention and entertainment value.

3. The Power of Context:

This rule is based on the concept that human behavior has strong ties and sensitivity to its environment. When ideas and innovative concepts are introduced with key timing and placement, the strong context can be an added boost in dissemination.

The Tipping Point and Healthcare

The Tipping Point is most applicable to new, disruptive technologies – devices, services, and processes which have unique benefits that are yet unknown in a widespread way. Think about telehealth, remote monitoring devices, clinical trial apps, digestible sensors,  personalized genomics, and so much more. When attempting to market and disseminate new technologies, consider how compatible they are with Gladwell’s three rules--especially the Law of the Few, which places heavy emphasis on your innovation’s early adopters.  Who are the individuals with expert-level knowledge who will truly appreciate the benefits of the innovation?  These are the players who have the most pull in bringing your brand to the spotlight of the marketplace.

To learn more about the concept and how your brand can benefit, check out this Tipping Point Q&A with Malcolm Gladwell.

to The Health Innovators Show on YouTube & wherever you get podcasts:

Get Social With Us!