LISTEN TO THE COIQ PODCAST:

LISTEN TO THE COIQ PODCAST: Telemedicine is here to stay. What to expect the day after w/ Joe Kvedar

How Innovative Healthcare Businesses Are Turning Marketing Costs into Profit 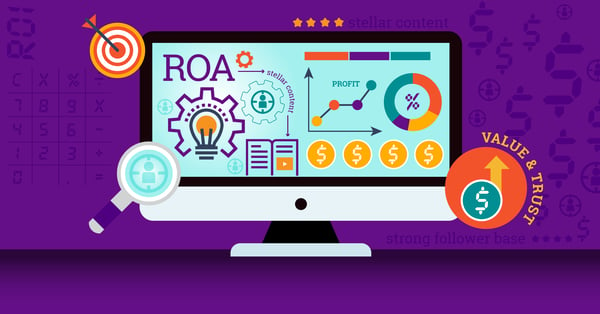 For many healthcare businesses — and virtually any other type of business you can think of — marketing is viewed as a cost or expense to the bottom line. Companies can spend years researching, developing, and implementing new marketing strategies and tactics (and purchasing expensive and complicated technologies) to bring in more business.

It always comes back to the same questions: what’s our ROI? Which tactic brought the most revenue? Leads? Website traffic? How can we minimize investment costs while maximizing value?

This is the way that marketing has been viewed since its inception, but Joe Pulizzi and Robert Rose’s book Killing Marketing turns this tradition on its head.

Can Marketing be a Profit Center? Yes!

What if healthcare brands stopped viewing marketing as a cost and turned it into a profit center? In this model, marketing begins to bring revenue itself, as opposed to companies using marketing to promote a product or service that brings revenue after the sale. And, instead of a tactic or strategy, marketing becomes a viable business model that fuels how the businesses communicate with the world.

Joe and Robert argue that not only is this a savvy, forward-thinking view — it’s quickly becoming necessary to stay afloat in today’s information-flooded realm of consumerism.

The Critical Need to Build an Audience

At the foundation of Killing Marketing is the idea that brands should first build a loyal, captivated audience through stellar content, then focus on monetization. Instead of ROI, think of it as ROA (return on audience).

The logic is that when you’ve built a strong follower base that truly finds value in your content, you can sell them virtually anything. They trust you as a reliable source of information, and more importantly, a solution to some of their key challenges and pain points.

When you’ve reached this level of trust, they’ll also trust your product and service recommendations. This goes for whether you’re manufacturing and selling those products yourself, partnering with other brands, or simply suggesting a good fit.

Today, Cleveland Clinic has massively profited from this model, earning revenue from different streams like syndication of its content to other companies, advertising and sponsorships, and more. Director of Content Marketing Amanda Todorovich notes that their efforts doubled the company’s revenue in 2017.

What began as a hospital network has morphed into one of the leading healthcare publishers in the world. In fact, the content is so valuable that Google approached Cleveland Clinic to provide written content covering specific healthcare topics that Google felt were inadequately addressed in search results.

The Evolution of Owned Media’s Value

In the mid-90s when companies began producing their own content as a loyalty tactic, the value was phenomenal. Fast forward 10 years, and the value dropped dramatically as it became a marketing tactic, and everyone realized they can create unlimited content with minimal investment costs.

But now we’re entering an era where content is becoming exponentially valuable when it has the ability to capture and hold an audience. 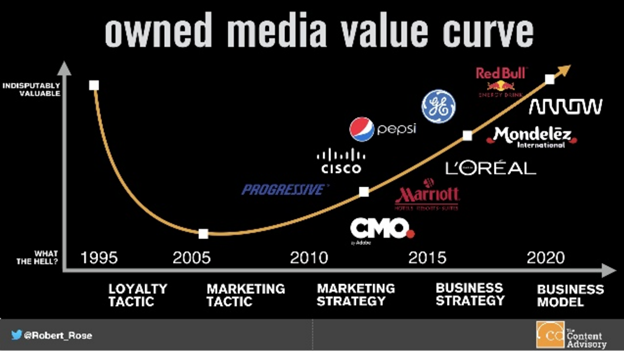 As we’ve seen owned media shift from marketing tactic to marketing strategy to business strategy, we’re on an upward trajectory to see it grow into a business model.

Household names like Red Bull, General Electric, and Marriott have realized that marketing isn’t about how they can catch an audience at just the right time to make a sale. It’s about creating amazing content to build an audience, and monetizing the audience down the line after the relationship has been built and nurtured patiently.

Red Bull has built hundreds of millions of fans from its dedicated, original, and genuinely interesting content. Because of this, the brand has built a concrete name for itself, and energy drink sales are only an added bonus on top of the many other revenue streams the company has cultivated successfully.

Brands that successfully “kill marketing” will find that they can directly monetize their efforts in 10 discrete ways, which Joe and Robert refer to as the “Media Marketing Revenue Model.”

The core five ways include direct monetization of content efforts: 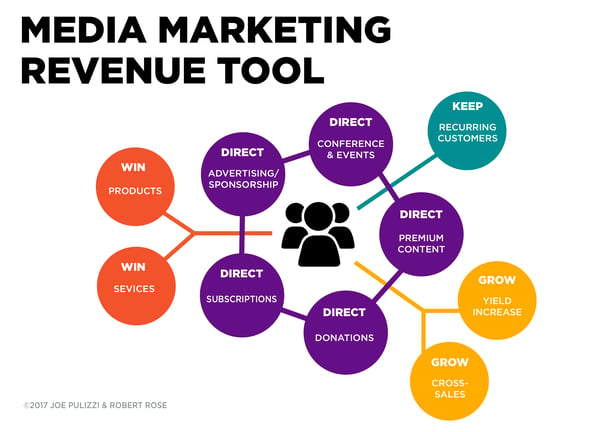 Joe and Robert assert that traditionally, media companies earn direct revenue, while brands selling products and services earn indirect revenue. However, the future will involve both media and non-media companies using this Media Marketing Revenue model to generate both types of revenue.

How to Kill Marketing as We Know it

In many of today’s healthcare board rooms, marketing isn’t brought in until after the fact. It’s often seen as a strategy to get your product or service in front of the eyes of consumers in hopes that it’s the right time for them to buy.

It’s also often seen as a burden or a drain on resources.

However, to survive tomorrow’s fierce competition for consumer attention, it’s imperative to treat marketing as a bonafide business model. When you slow down the lead nurturing and sales processes, you’ll uncover an audience that truly wants to hear from you, instead of plopping in a fake email address so they can download one of your ebooks, never to visit your website again.

If you’re interested in learning about how to kill the old ways of marketing, and rebirth a new, better way of building your healthcare brand, you need a team that specializes in developing engaging, audience-centered content driven by an in-depth understanding of the healthcare market.

Contact us today for your free 30-minute analysis on how you can turn your marketing costs into profit.

to The Health Innovators Show on YouTube & wherever you get podcasts:

Get Social With Us!